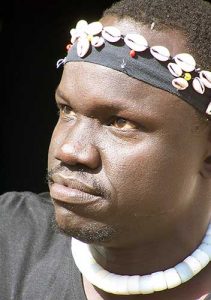 Stephen Ochalla is the founder of the Orupaap Cultural and Creative House. He is driven by a strong vision to develop a distinctive South Sudanese musical identity and the desire to use music as a healing medium, uniting the the South Sudanese people through their cultural richness and diversity while working tirelessly for peace. His vision of Orupaap is as a flourishing centre in Juba devoted to music education and the exploration of the musical diversity of his country, researching, preserving and promoting the traditions while developing new musical forms, giving young South Sudanese a sense of identity and purpose and the opportunity to study the music of their own country. Stephen is an accomplished percussionist, dancer and choreographer with a deep knowledge of the dances and rhythms of South Sudan. Apart from his musical skills and experience he has studied TV editing at the Sudan Academy of Film and furthered his education through a scholarship in 2013-14 to study contemporary dance at the Fontys Dance Academy in Tilburg, Holland where he obtained a professional diploma in theatre dancing, editing and design. He has published articles, written plays, recorded, organized seminars and workshops and has extensive experience as a choreographer. He has performed in many countries around the world including Holland, Italy, Turkey, Tunisia, Lebanon, Dubai, Ethiopia, Eritrea, Egypt and France.

Emmanuel started playing the piano during his studies at the Music Training Centre in the St. Josephs Technical School in Khartoum in 2005. He holds a Bachelors degree in public and environmental health from the Upper Nile University. On his return to South Sudan he joined Orupaap Creative and Cultural House in 2016 where he teaches piano. He also performs regularly with the Orupaap Group in South Sudan, most recently at the 6th Orupaap Nature Arts Festival and this year internationally at the DOADOA East African Performing Arts Market in Uganda in May 2017.

Ezra started working with the Orupaap Cultural and Creative House in 2013 as a drummer and dancer. At Orupaap he began studying guitar and learnt to read and write music. After making rapid progress on his chosen instrument he was invited to join the Orupaap group as the bands guitarist and began teaching guitar in the Centre as well. He as performed as a dancer, drummer and guitarist at festivals in Khartoum, Addis Ababa, Egypt and Uganda besides working regularly with the group in Juba.

Ogoi plays the drums and the bass guitar. He has worked at the Orupaap Cultural & Creative House since 2005 when it was still based in Khartoum in Sudan. After independence Ogoi moved to Juba and when the new centre opened he began teaching both drums and the bass guitar there. As a musician he has toured extensively internationally with the Orupaap Group in Egypt, Poland, Holland, South Africa, Sudan and Uganda. He also performs regularly with the group in South Sudan. 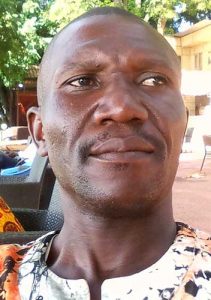 Justin James Kazaran was born in Khartoum in Sudan, while still at school he began dancing and in 1988 he became a full member of the Sudan National Folklore Group. He trained professionally in dance in 2007 and in 2009 he attended the Sudan Academy for Administrative Science where he took courses in management and financial management. He has toured through all the states in Sudan with the National Folklore Group and performed in many festivals there over the years. He has also performed internationally in Dubai, Djibouti, Nairobi, Libya, the Emirates, Oman, Germany, Egypt, Qatar, Turkey, Kuwait, South Korea, Abu Dhabi, France, Algeria, Ethiopia, Indonesia, Bahrain, China, Uganda and South Africa both with the National Folklore Group as well as with the Orupaap Group. Justin teaches traditional South Sudanese dance at Orupaap and is also responsible for the administration of the Orupaap Creative and Cultural House.